Oh hello. Sorry I dropped off the planet for a while. No reason, I just did. I feel like we've done several fun little things since my last post, so I'll try to add a few more in the next week or so. 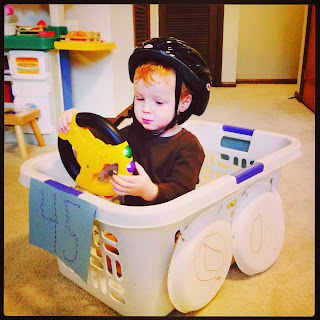 Everything over here is either race cars or Frozen right now, so a few weeks ago, we made Rowin his own laundry basket race car. I dragged out the process of MAKING the race car, which I'm glad I did, because once it was done, he only played in it for about ten minutes. Ha!

First, I had him decorate his wheels (four paper plates) however he wanted. He went with the classic brown circles. Gotta love three year old boy art. I punched holes in them and he helped me string the yarn through the holes to attach them to the basket. Good fine motor practice! 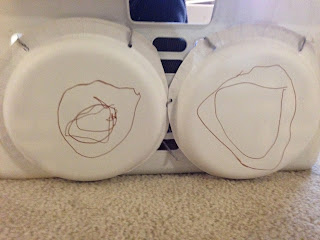 Then I had him pick which number he wanted his race car to be. I wrote his number in a dotted line and had him trace over it-once for the front and once for the back. More fine motor practice, as well as number recognition. 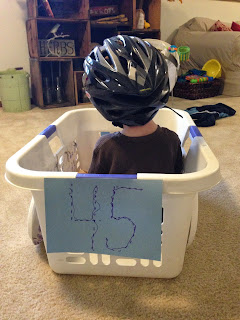 After we taped those on, we grabbed a helmet from the garage and a toy steering wheel that we had. If you decide to do this, make sure to include your little one in the process-that's where most of the learning happens! Plus, the anticipation is half the fun. Rowin was giggling the whole time we were "building" our race car because he was so excited!